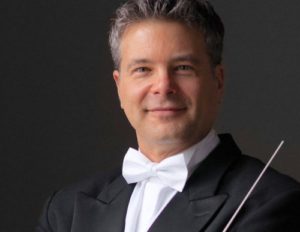 Robert Lehmann is Professor of Music at the University of Southern Maine Osher School of Music where he conducts the Southern Maine Symphony Orchestra and the Portland Youth Symphony Orchestra. In addition to his duties at USM, he is Music Director of the North Shore Philharmonic Orchestra and the White Mountain Bach Festival. He holds degrees in Violin Performance from the University of the Pacific, the Eastman School and Boston University, and has been a fellow at the Aspen Festival American Academy of Conducting and at the Conductors Institute at Bard College. Dr.Lehmann has concertized as violinist and conductor, in his native Mexico, throughout the US, Central America, Europe, and Ukraine. He has been of frequent guest conductor with the Portland Symphony, Portland Ballet, and has conducted All-State and Festival Orchestras from Maine to California and Hawaii. He has been an adjudicator the National Orchestra Festival at the ASTA National Convention and is in
demand as a performer, conductor, teacher, speaker, and is listed in Who’s Who in American Music.

He has performed as first violinist of the Meliora Quartet and concertmaster of the Opera Maine Orchestra and the Choral Art Society. His CD, “Chamber Music for String by Manuel M. Ponce” was issued by Centaur Records in 2009. Prior to his appointment at USM, he was Music Director of the Mozart Society Orchestra at Harvard, and on the conducting staff of the Greater Boston, Rhode Island, and Empire State Youth Orchestras. He has given numerous word and regional premieres including Elliot Schwartz “Concerto VI: Mr. Jefferson”, Portland Ballet’s “The Legend of Sleepy Hollow” and most recently Daniel Crozier’s double clarinet concerto “Spirit”, and Daniel Sonenberg’s “kintuskuroi”. His 2012 performance of Mahler’s Symphony No. 3 was named the top performance event of the Portland concert season by The Portland Press Herald.

2022 highlights have included return engagements to perform a recital at the American Church in Paris, with the Assisi (Italy) Performing Arts Music Festival and conducting the Festival Orchestra at the Region IX Texas Festival. 2023 will bring a faculty recital at USM featuring the Bartok Contrasts and Chausson Concerto for violin, piano and string quartet, and conducting the 2023 Maine All-State Festival Orchestra.

Dr. Lehmann primarily plays a 2014 Benjamin Ruth (Swampscott, MA) violin and resides in Scarborough, Maine with his wife Kim, a violist with the Portland Symphony Orchestra, and his partner in the “Lehmann Duo”.